Rutgers University’s entry into the Big Ten Conference presented researcher Carrie Esopenko, PhD, with an invaluable opportunity. As someone whose life work was understanding head trauma, she now had a chance to be part of a multi-institutional study of concussions by some of the nation’s most elite academic universities. 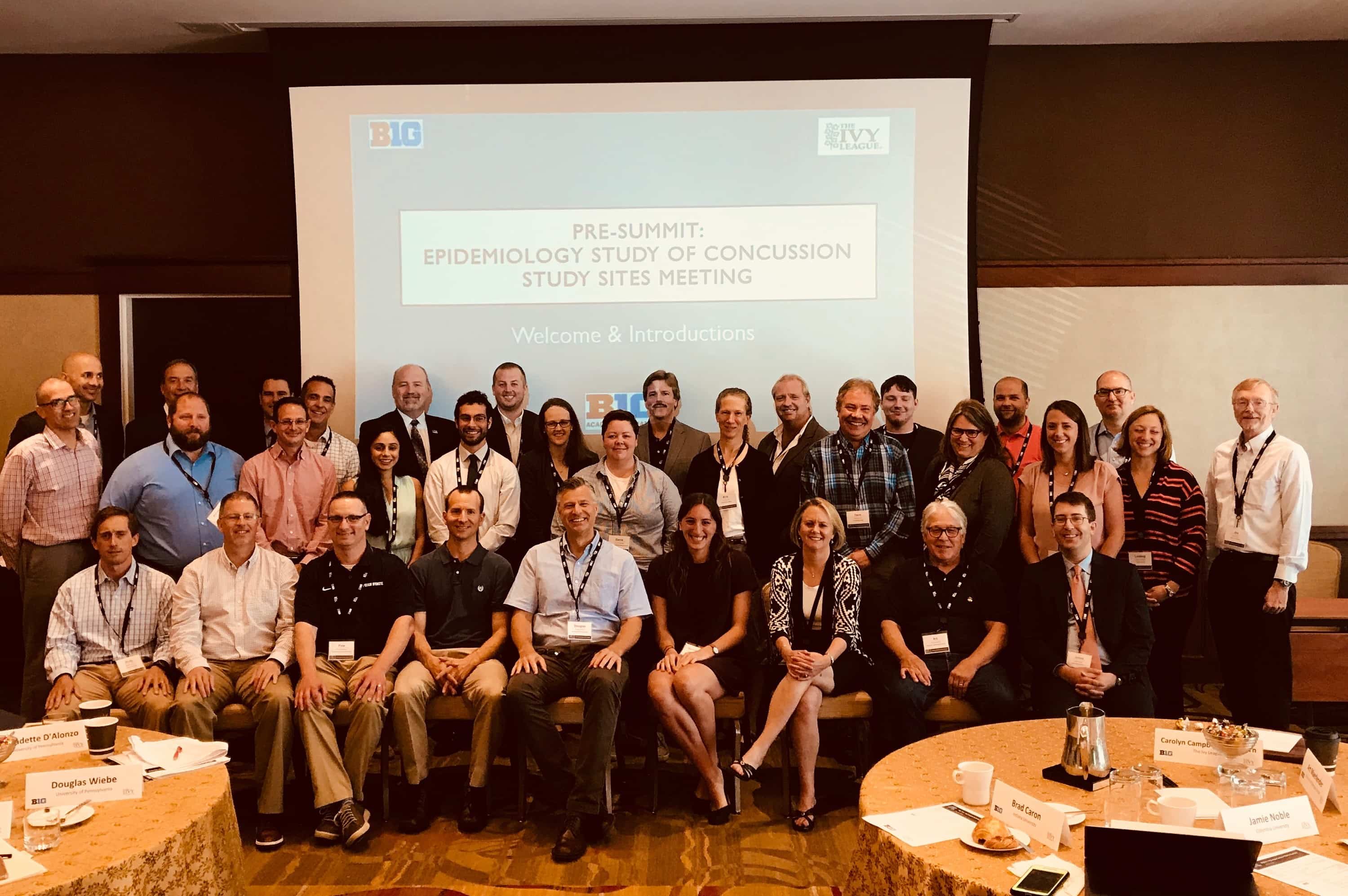 Members of the Big Ten-Ivy League Research Collaboration on Traumatic Brain Injury at a pre-summit meeting.

The mission of the collaboration, whose members include the eight Ivy League and 14 Big Ten universities, is to better understand the causes and effects of sports-related head injuries and concussions, and ultimately improve the health and safety of student athletes.

The collaborative effort dates back to 2012, when the Big Ten, The Big Ten Academic Alliance and the Ivy League joined together to become a national force for change in intercollegiate athletics.

“This is about being able to have larger scale numbers, and an ongoing collaboration between physicians, athletic trainers, researchers, and administrators to better understand who’s at a higher risk of injury and what we can do to try and reduce that risk,” Esopenko said.

The multi-institutional effort opens a window for researchers into an expanded pool of data on concussions from those at a single school to 2,600 – providing a near-complete registry of concussions sustained by athletes in all types of contact sports in the Ivy League and Big Ten athletic conferences.

“By collecting a large amount of data across schools, we’ll also be able to better understand sport- and sex-specific risk factors for concussion,” Esopenko said.

A former athlete whose interest in the field stems from her own experiences with concussions, Esopenko has been in the forefront of research into how head trauma affects women differently than men. Ongoing studies in her laboratory specifically examine how head trauma impacts psychological, cognitive, and neural outcomes in women, including in collegiate athletes and survivors of intimate partner violence.

In monthly calls, Esopenko discusses the study’s progression and new directions as it expands. She is a member of the study advisory committee, which includes the study PIs, two site PIs and representatives, Big Ten and Ivy League administrators, and external advisors who provide oversight and review data requests.

In July, she’ll participate in the annual Traumatic Brain Injury Summit. Researchers from all 22 universities will convene to discuss translational applications of their findings, identify opportunities to strengthen the data collection operations and adherence to protocols, and recruit additional schools to the Epidemiology of Concussion Study.

“This has opened my world up to a lot of people who I may not have had an opportunity to get to know and work with and have those important conversations about how we make sports safer,” said Esopenko.

“The bigger picture is, we’re part of this collaboration that is really at the forefront of understanding what increases risks of concussions. We’re hoping that the information we collect will help inform sport-specific rule changes to reduce the risk and prevalence of concussion.”